This fascinating 10-day discovery tour of Cambodia from Battered Suitcase is sure to stimulate the senses. It takes in an amazing array of attractions and experiences rarely included in a trip of this length.

The journey takes you through centuries of history from fantastic temples built in the 1100s through to modern day Cambodia as well as an insight into the country’s more recent tragic past; there’s even a half-day cookery course and a visit to a silk worm farm.

Although Battered Suitcase has put together a suggested itinerary, since each journey is bespoke, it can be tailored to suit the individual traveller. You can choose what you want to see and the pace you want to travel at.

The itinerary begins with a guided cyclo tour of Cambodia’s bustling capital of Phnom Penh. Once considered to be amongst the most beautiful cities in the Orient, it still retains a colonial charm majestically located at the confluence of the mighty Mekong and Tonlé Sap rivers. The tour takes in the Royal Place, which has over 5,000 silver tiles covering its floors and is home to a collection of Buddhas in gold silver, crystal and bronze. In the evening a welcome dinner is included at the renowned Foreign Correspondents’ Club. 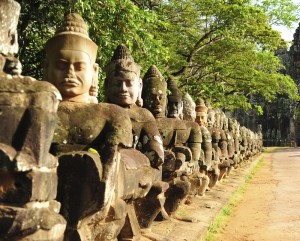 Cambodia’s dark history is perhaps better understood after a tour of the Tuol Sleng Genocide Museum the next morning, which occupies the former Khmer Rouge detention and torture centre, and a visit to the Killing Fields of Choeung Ek.

Few visitors get to see the floating villages on the Tonlé Sap since they are only accessible on the water.  Battered Suitcase’s itinerary includes a trip on a private wooden riverboat past the villages and fishing stations plus a chance to see how the people of Koh Chen, or Silver Island, make ornamental items used in traditional pagoda ceremonies.

Leaving the capital your driver will continue to Battambang in the north west of Cambodia. Here the itinerary takes in Phnom Sampeau, one of the area’s few hills with stunning views from the temple on its summit, but it’s also home to the notorious killing caves, another grim reminder of Cambodia’s past. At dusk thousands of bats emerge from the caves and create spectacular patterns as they fly in tandem across the sky. 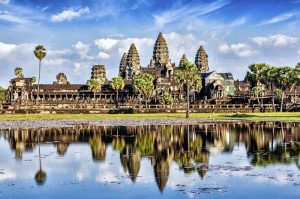 Highlight of the Cambodia discovery tour must be a visit to the Angkor temples. A good place to start is the Ta Prohm, built in the late 12th and early 13th centuries it has been left largely as it was found, with its crumbling towers and walls locked in the vast roots of overgrown jungle trees and vines.

The ancient city of Angkor Thom, the last capital of the Great Khmer Empire, is surrounded by an eight metre high wall built in an almost perfect square. On each side of the South Gate is a row of 54 gods or demons holding the sacred Naga snake, while the 12th century Bayon Temple in the city centre is famous for its 54 towers with enigmatic faces representing the Empire’s 54 provinces.

A UNESCO World Heritage Site, the legendary Angkor Wat is thought to have taken 30 years of hard labour to construct. Inside the walls are covered with stone carvings and bas-reliefs depicting Hindu mythology and the wars fought by King Suryavarman II as well as over 2,000 Apsara dancers. 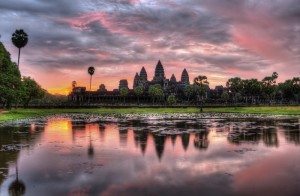 All our travel products are 100% financially protected, leaving you to enjoy looking forward to your holiday